Hot Day at the Zoo, 1/16/09, the Matterhorn, Stowe, VT
2 Fridays ago I decided to test out the new Impreza with it's first road trip: we needed to bond. Appropriately enough, my destinations would include live music, cold weather, and skiing: I headed North to the old stomping grounds of VT (the snow looks happier up there) and made pretty good time til hitting a jam of black icy goodness on 89, but still managed to make it to the Alchemist where Sara, Bill, the Bourbon Cowboy, Leeeza, and I waited for 2 fucking hours to eat!!! Sweet baby Cheesus, I could have been drunk at the venue by then. We scarfed dinner, hauled ass over to Stowe, and got inside the Matterhorn just as Hot Day at the Zoo were doing their soundcheck. We expected wall-to-wall rowdy drinker types (ala the Currently Nameless nights at Mad Mountain Tavern), but the place was surprisingly empty which we chalked up to the -10 temps (flat-landers can't handle REAL winter). The balmy weather didn't stop Amy, her boy, and a handful of other local music-lovers who were recruited by various members of our party from showing up (and some other random locals taboot) to enjoy some bluegrass. 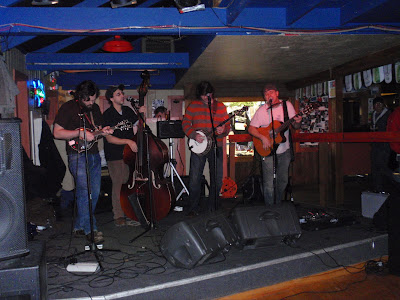 Hot Day at the Zoo are a 4-piece string band out of Lowell, MA, (guitar, banjo, upright bass, mandolin), they play situational and character driven originals splattered with literary references, covers that range from Electric Company songs to Nirvana, you name it- they'll celebrate it and they're not afraid to make it loud. The first time I saw them was at a snoe.down in the Vodka room and then possibly a moe.down too? Or not? Foggy, foggy recollections of good, good times. So it goes. Regardless, Hot Day at the Zoo are fun. Really fun. PLENTY fun. They always manage to put a smile on my face and they've got a wicked kazoo player, so really- how can you go wrong*? One thing that's changed about the band since I last saw them is the Mandolin player- he's completely different (not like sex-change different, but a different person entirely). Their original guy definitely had his own stage presence, but new guy, JT, is quickly becoming the perfect fit- he's awesome, a great musician, plays along with the music to create it- not fight it or muddle it (this is really important) and with every jam they seem to explore the new band dynamic, finding and opening up the right spaces to let the music breathe. It's working.

Whoa, that was intense. Anyways, they didn't do an encore so we booed them.

1/20/09, Tupelo Music Hall, Londonderry, NH
Iyeoka Okoawo & The Rock by Funk Tribe
Hot Day at the Zoo
Rockspring
After a moderately successful day at Sugarbush I hit a giant frost-heave and ended up at Tupelo Music Hall in Londonderry**, NH for another night of zootastical (zooriffic?) live music madness on their Inaugural Celebration*** Night. Why the fuck not, eh? This place is supercool, it's a gorgeous room, the soundproofing is spot-on, it's BYOB (or BYOS... the 'S' is for "screwdriver"), and it's in the middle of fucking nowhere. Seriously, you're on a road with NH strip malls and you pass the Outback Steakhouse and slam on the brakes cuz the Tupelo is on the right. The sign out front said Joe Piscopo is playing there in a few weeks- good for him. The only thing I found really distracting were the tables set up against 2/3 of the front/center of the stage and the random gobi screaming Barack Obama's name and waving in imaginary wind a bedazzled American Flag he occasionally rubbed his face on****.

The first band up were Iyeoka Okoawo & The Rock by Funk Tribe, a hip-hop-funk-soul-poetry joint out of Boston. Think Lauren Hill, Jill Scott, unplugged-Jay-Z vibe, with both a female and male vocalist and fucking solid rest of the band (drums, keys, screaming guitar, slappy bass-- YES, YES.)- they each held it down tight. They had the place grooving. I felt culturally blessed to have been a part of this experience in Londonderry, NH. 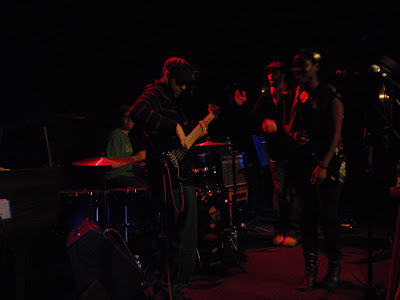 Next up, our string-pickin' heroes HDATZ (that's what the kids on the interwebs call them) and even on a Tuesday night, they brought it. There was more of a dancing crowd at this show so it was nice to see so many people getting down (for all the bands), the energy levels were upped from the Stowe show, the room was also much warmer in sound & vibe which absolutely contributed to the performance. All 4 guys shined, their harmonies were hypnotizing, and it was pretty awesome to watch the new lineup keep evolving (even over a matter of days), ripping shit up, and complimenting each other. You could also feel the relief in the air that Barack Obama was finally sworn in as President of the United States of America (the heavens shined down upon us and a chorus of cherubs praised cheesus, amen- whadya know? Hilary's speech was right...). FINALLY! 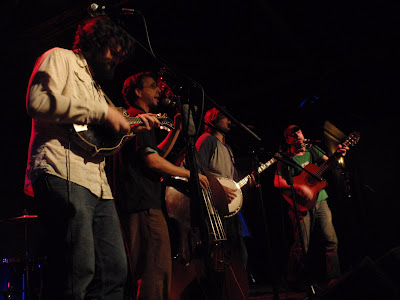 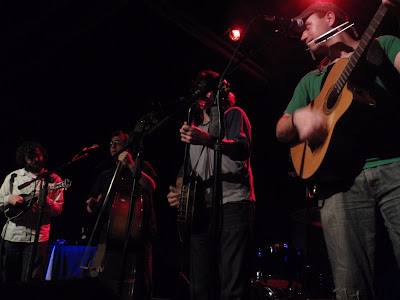 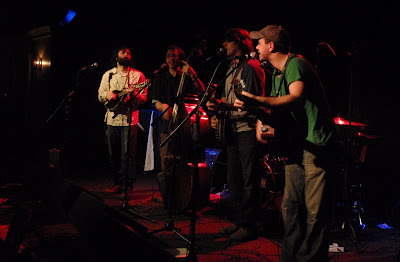 Thirdly, Rockspring, another great bluegrass band from the area- their music was sweet, pretty, and badass all at once. Also, they all had good hats. ALL OF THEM! I'd love to see them again. These guys (HDATZ and Rockspring) should play NYC together so I can go see them... Just sayin'. 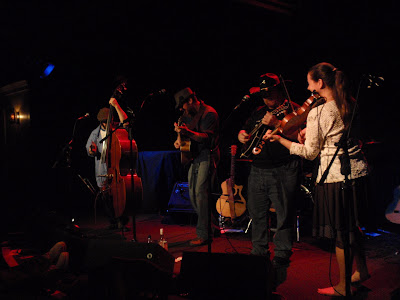 It was a red hot night of music at a random spot in New England and it couldn't have left me happier. I walked outside, shuffled around on the ice covered pavement, inhaled the cold NH air, and thought to myself - there are people who go their entire lives without experiencing such a diverse, beautiful, soul-satisfying night of music... and fuck those people because they should get out more...

Cold New England Musical Binge Weekend/day Adventure: 9 HUZZAHS!!! Points taken off for no encore Friday night and the incident where Red Sox fans tried to poison me. It didn't work for the KGB and it won't work for you, Theo Epstein- so back off, guy.

* Hot Day at the Zoo makes me want to drink beer... it's some sort of sweet thirst from within.
** what the fuck am I doing here?
*** did anyone else catch Will.I.Am drop the n-bomb in front of the entire first family and WORLD at that Lincoln Memorial concert???
**** free pink-eye, anyone?
Posted by lynn at 10:31 PM 3 comments:

Email ThisBlogThis!Share to TwitterShare to FacebookShare to Pinterest
Labels: hot day at the zoo, Iyeoka Okoawo and The Rock by Funk Tribe, live music review, rockspring

Camper Van Beethoven, 1/10/09, the Bowery Ballroom, NYC
Lucky for us, the heavily feared BLIZZARD OF '09 was a total fucking dud and we easily made it out for this show. By "us" and "we", I mean, Hern, Lisa (on the 6th Anniversary of their first date which was at a Camper Van Beethoven show- Happy Anniversary you crazy kids!), and myself. I haven't been to the Bowery Ballroom in years, it's still a fun place to see a show and as a matter of fact, "fun" was the descriptive word of the evening.

Camper Van Beethoven were really fucking fun. It was their 25th Anniversary show and the 2nd of a 2-night-stand at the Bowery Ballroom. I was only introduced to CVB after being a devoted Cracker fan for years (early members of CVB eventually became members of Cracker)- many friends would provide me with mix tapes of an obsessive nature which I always appreciated and enjoyed, but never really pursued them much further than that. A few years back Cracker played at moe.down but I think that was technically considered a co-mingled "Cracker Van Beethoven" show. If anyone can answer that for me so I don't have to look it up, it'd be much appreciated.

Not being rabidly devoted like so many of their fans, I didn't have the option of picking apart the tunes or scrutinizing the setlist in any way (recognized many tunes, didn't know all of 'em), which is one of the reasons this show was so damn fun. It was straight up ROCK led by David Lowery's distinct voice, Greg Lisher's wailing guitar, and Jonathan Segel's scorching violin work. Absolutely slamming. There was a woman wearing all pink, with a Macbook, holding a key-tar up in the balcony who was running the footage on the giant screen in back of the band. I just like saying "key-tar". 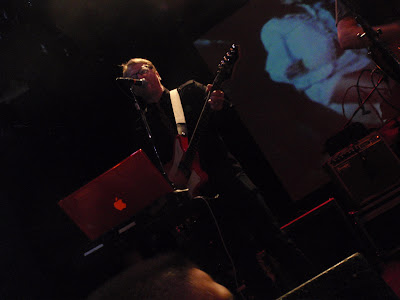 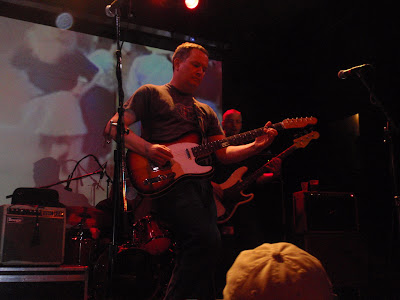 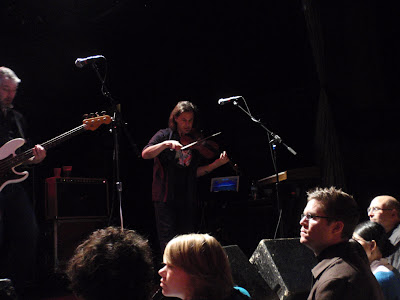 The opening band was Wormburner who we were enjoying down in the lounge and finally hauled our asses upstairs only to be mesmerized by the kinetic lead singer. I would call it narrative-art-house-loud-rock's-hyperactive-cousin*. The lead singer was shouting the story of two kids in love while video of Sega's Out Run ran on the big screen- wind waving in the hair of the two convertible passengers. It was very fun and truly an entertaining time.

Camper Van Beethoven's 25th Anniversary show, 1/10/09, the Bowery Ballroom, NYC: 9 HUZZAHS! So much fun!!! (Also the place wasn't a total clusterfuck which helps- don't think it was sold out and the weather-scare probably kept people from showing).

CVB is taper-friendly and wouldn't you know it, we spotted a taper in the balcony (step 1, we know the tapes exist). The following day Joe Madonna sent me the link to the Friday night show and with a little patience, eventually the Saturday show also appeared! WOOT. Awesome to have a copy of this for the ipod:

Didn't get many pics cuz I was distracted but here's a small, shitty gallery and SLIDESHOW!