getting a bad feeling about this?

seriously though, when exactly did the mccain camp completely give up? this is just a fucking joke now... he must have told his team that he did indeed sell his soul to the devil in that vietnamese POW camp. he has no fears anymore and only 1 thing left to lose (he already lost his dignity). ugh, someone needs to piss on this fire and just put it out!

james carville is somewhere waist-deep in mint juleps and snorting coke off gary busey's dog pissing himself laughing.
Posted by lynn at 12:22 AM No comments:

K, so I never wrote a moe.down 9 review but I'm way backed up on posts and the pictures do a pretty great job of representing the entire weekend- and so, some narrative bullet points:

Fun story- so first set of the last night these really really young & massively fucked up kids were standing near us. One turned to me and said, "when they finish the last set, we're going to chant, 'WE WANT moe.down!'." To which I replied, "that chant makes no sense... you're AT moe.down." Then the kid went on to explain that there would be no more moe.downs and that the band was breaking up. I am starting to think I'm the only one who reads the news page. So I had to let him down easy- that not only were the band not breaking up, but they would be playing again in 2009, including moe.down. Yes, really. Yes, I'm sure. Okay, well scream whatever you want, but if you scream THAT, you're gonna look like an asshole.

moe.down 9, '08: 9 HUZZAHS!!! Next year must have: Black Crowes, Ween, Wilco, Cake, and a frozen margarita making robot in the vending area.

*Sounded great from the campsite
** sarcasm. I heart moe. and Rob is dreamy.

I owe a number of music reviews, including this one, so it's gonna be short & hopefully sweet.

Lo Faber is the best.

He played on a sidewalk with Ken Sidotti & John Rango (Echofission). It was totally awesome. Apparently they make mysterious guerrilla appearances in small Jersey bars while Lo is in between study breaks.

Sidotti is a cool-ass keyboard player!

Get On The Train, baby!

AWEsOMEneSS! 9.5 HUZZAHS! I only deduct -.5 HUZZAH because I was stuck in a line of traffic behind some jackass in an RV going 10mph below the speed limit on my way to the show and I missed the first 5 minutes (what a dick!).

Back in college I had the pleasure of attending a lecture by famed sculptor Vito Acconci in a barn in Johnson, VT. A lecture required by one of my favorite professors ever, the wonderful Barbara Zucker- and a lecture which I would gladly have attended voluntarily. Vito spoke of the importance of public art and how it exposes itself to an audience which would not have sought it out had it been inside a museum or gallery. Art which by nature is created with a different intent. Art in the street, the subways, the parks- installations such as "the Waterfalls" or Cristo's "the Gates". 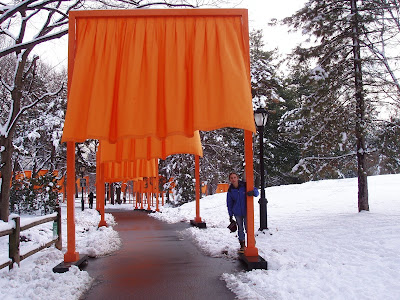 Well, what do we have here (now)? Banksy does New York!
Turned a corner and ran smack into this the other night around Grand & Wooster. I knew these were lurking around and had yet to catch one. I am going to have to go back and hit this in the daytime, I really like the bright green and couldn't see it at night, it's brilliant (below are not my pics): 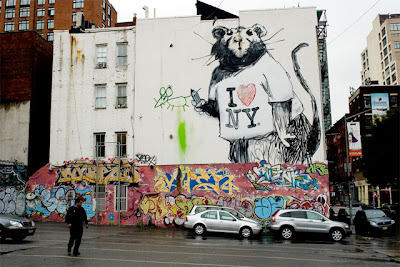 Also ran into the one on Canal w/ the window washers (couldn't get to my camera fast enough, 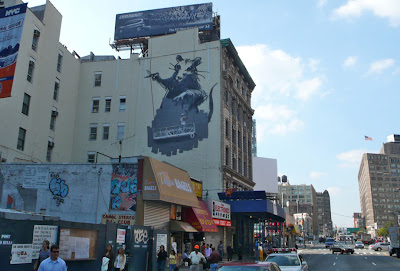 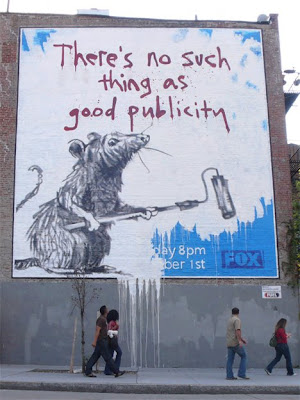 Really like this crack one at Howard & B'way. Totally digging the scratched bloody hands. 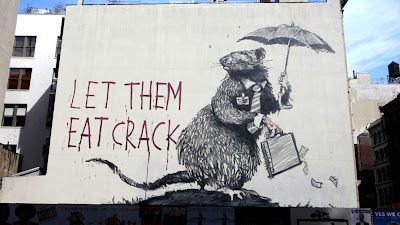 He also tagged a couple of phones somewhere... 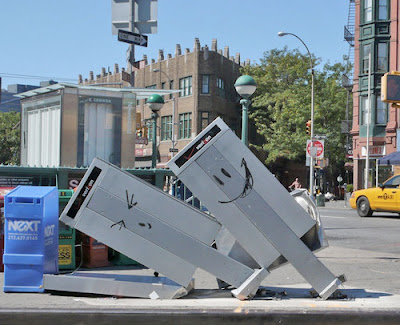 An art professor once told me that I had a brilliant future as a graffiti artist. perhaps I'm Banksy.
Posted by lynn at 7:25 PM 1 comment: 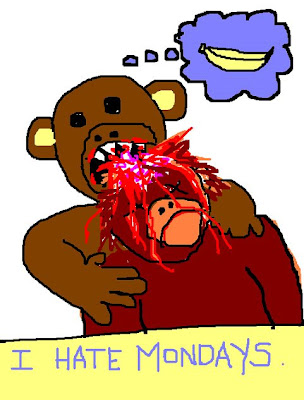 on the job training...

Tonight I realized who Sen. John McCain reminds me of. It's Ned, from the Venture Bros, he's one of the Fantastic Four parody. As described by the Venture Bros Wiki, Ned is Sally's retarded cousin, with 3 inches of callused skin so the insults don't hurt! 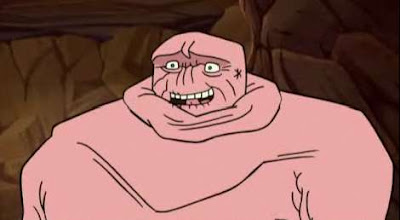 And now look at McCain:

You can barely tell these two apart- here, test yourself: 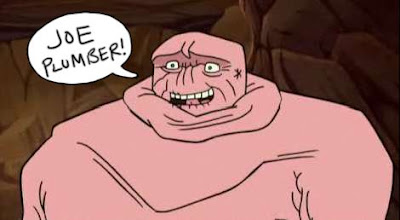 Just absolutely impossible to figure this out*.

* I really can't tell... They definitely both sound like McCain.
Posted by lynn at 10:04 PM No comments:

What if? John McCain Had a Heart Attack?

What if John McCain was elected President of the United States and then he had a heart attack?

That's pretty much the idea of this post.
Posted by lynn at 10:00 PM No comments:

McCain to Supporters: "Why You Gotta Be So Angry?"

Back when I was running for Mayor of moe.ville, I learned to take the hardcore devotion of my followers with a grain of salt. On advice from my Attorney, I also had to memorize this statement which got me out of a few sticky (or sticker-y) situations:
Yes, we definitely created a monster.
(PICTURED BELOW: campaign manager el herno & mayoral candidate- me, circa 2002) 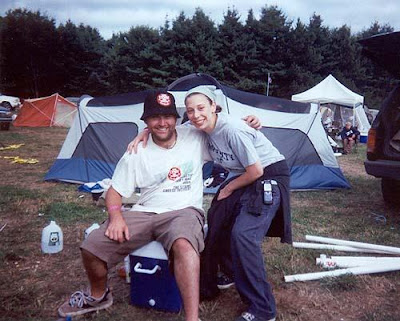 Currently, Republican Presidential Nominee Sen. John McCain is witnessing the devotion of his very own supporters... And they're kind of scary.

While I don't believe John McCain created this monster, I do believe his campaign may have fed the monster HGH, Coffee, Crank, PCP, Meth, and tied it to a tree poking it with a sharp stick until it broke free and ran wild on Main Street of Anytown, USA, disemboweling Joe 6-Pack for kicks. That said, I think some of his very worst representatives have finally started to crawl out of the woodwork and even he is disgusted by their actions (or maybe he's finally realizing that these are the only people left?).

Yes, although he has not admitted it- I kind of think maybe Sen. John Sidney McCain III is partially responsible for the dedication of his followers.

Like this now famous racist, whom tv cameras shot from the back, hiding her face...

Or these two creative sign-makers at a McCain rally...

and this poor girl who is too young to realize what cause her parents sold her out to (and her father who would be at work except that he lost his job a while back)...

All in all it's a swell group of folks and I anxiously await meeting more of them in the days ahead. They can only enlighten us, no?
Posted by lynn at 10:20 PM No comments:

McCain to Obama: "Hey You, My Soup Is Cold!"

Where's Sandman Sims when you need him? I'm starting to feel kinda bad for John McCain. Not bad enough to give the pandering old whacko a sympathy vote, but bad enough to make him some farina or something. The other night at the debate he was just teetering around the stage like a tired old man. He doesn't want to be the President anymore, he just wants to put on some flannel pajamas, eat some apple sauce, and fall asleep in his favorite chair.

There he was onstage at the debate, shuffling around mumbling about "nuclear power" with no full grasp or explanation of the disposal issues of such a venture (he gets his ideas from watching the Jetsons). At around 00:59 he becomes Mr. Burns.

Stop for a second, go back, read that again. After watching that clip above (if you did) you should be made aware that Nuclear Power Plants have short shelf lives and even aside from the water, wildlife, and local ground pollution they contribute to while they are in service, when a plant is closed the equipment (including reactors and plutonium) must be dismantled, decontaminated, wrapped in a glorified industrial strength garbage bag, buried in a hole in the ground, and then covered over with cement- eventually* the radiation will dissipate- in other words, there are currently only temporary storage methods for it's disposal. Sounds safe to me! Silly Barack, always bumming people out with facts.

Regardless- just look at this:

Is that the look of a man who still believes what is coming out of his own mouth? All he is now is the slowly fading last hope of the Conservative Republican Dream. The Dream is Dead, Assholes.

Gullo pointed out that this is similar to Nixon's double-V,

it's a good point, cuz you just know if McCain could still lift his arms above his head, he would be doing the same pose.

One "kind" thing McCain has done in the past day or so, is try and settle down the angry rednecks who the anti-Obama propaganda has been aimed at and riling up.


Not only does McCain sound like he's already conceding, but he also sounds like he's ready to vote for Obama himself.

Oh, and Sarah Palin was found guilty of abusing her power as Gov. of Alaska by pressuring officials to fire her former brother-in-law, a State Trooper who had a messy divorce with her sister. This is the woman who said she thinks the Vice President should be granted more Executive Powers.

It's hard to believe there are still undecided voters out there; at this point they've either gotta be stupid or racist- these people should no longer be allowed to vote.


*plutonium's half life is 25,000 years, by then McCain (and all of us) should theoretically be dead, so you won't have (John McCain) to kick around anymore!
Posted by lynn at 10:42 PM No comments: