the dream is dead, gone, all smashed up.

tonight, the yankees officially ruined baseball. this roster and season are a disgrace to legends past and the ghosts of yankee stadium.

after a season of spiritless ball playing, tonight's apex hit me like bobby abreu hitting a wall- slowly and cautiously before falling over and whining like a little fucking bitch. for it was at that exact moment i finally gave up on the 2008 yankees and turned on 'project runway'. the new york yankees do not deserve to win a game let alone a pennant race, wild card, or series title. they're fucking awful.

i've tried to wrap my brain around it a million times (at least a million). was it the loss of joe torre? is arod's tabloid drama locker room poison? it's easy to blame injuries: posada, jeter, arod, joba, hughes, wang- all down for part or all of the season. for a while i had convinced myself that it was the curse of yankee stadium. the realization that the mystique- the very heart & soul of the team was mortal. the boys in pinstripes no longer had yankee stadium on their side and the prospect of moving across the street was draining their souls- everything they'd been taught to believe in. but perhaps it's not that at all. perhaps it's much more simple: too much partying, padded paychecks, and a team full of individual egos with no drive.

you don't need a golden thong, a mustache, or a ford commercial to play baseball. you need the soul of a child* or a warrior- one who wants it badly enough... the yankees don't want it at all.

*i am in no way promoting ritual sacrifice
Posted by lynn at 11:43 PM 1 comment: 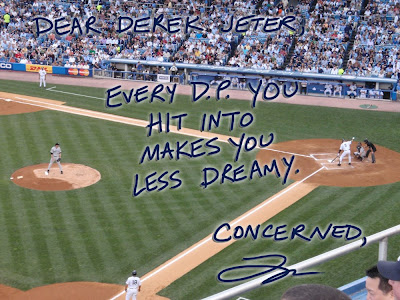 "are you going to come to the siren festival?"
"no."
"why?"
"because i hate people."
"i hate people too... but i love stephen malkmus!"
that was a conversation i had with my friend chris the thursday before caroline and i decided to hit the siren festival in coney island 3 saturdays ago (i've been busy).

i should have listened to chris. or maybe not, i'm still on the fence as to whether or not this was a good idea. new york city was in the throes of an awful heat-wave (still is) so the fact that we were "going to the beach" on a saturday afternoon was pretty sketchy. but stephen malkmus & the jicks! my two issues with stephen malkmus & the jicks are 1) why the hell am i on their mailing list if they don't email to tell me their tour dates and when tickets will go on sale? why must i always find out the day after they've gone on sale and sold out? why am i learning from the bowery ballroom's newsletter as opposed to the band themselves? IT MAKES NO SENSE. and 2) he plays for barely 1 1/2 hours and then he's *DONE*. why not longer??? EVER? unless stephen malkmus ALSO hates people- oh wait, he DOES... that explains everything.

anyways. i got lost driving in brooklyn. the prospect park expressway was CLOSED. i had written alternate directions in case of a parade or marathon or something like the prospect park expressway being CLOSED. what a mess. driving around like a retard for 45 minutes. just an observation: caroline's block smells like pee, but only when you first walk up it. once you get to the houses it kind of dilutes into the atmosphere. her roommate made us all some funky limonata gin & juice that HIT THE SPOT. then we headed out the door to the subway. the ride was quick and painless. when we turned the corner in coney island it was a bustling hub of beach & concert goers. we spotted the stages and hopped out of the train.

this is when it began. the awful-- i mean.... tens of thousands of people everywhere, i'm sure less than 5% of them were there for the concert. EVERYWHERE. like they just scurried to the beach. aaagh. okay, breathe... we found some schedules and then a taco place that time out new york had deemed a "hidden gem". awesome tacos! it was around this time we noticed people walking around with giant plastic mugs for "daquiris". we wondered if they had any alcohol content at all, since these vendors offered free refills and no one seemed to be getting carded (the answer is 'no', it was a scam, so bring your own tequila if you go). we tried to walk to the main stage but ended up wedged into the corner with the wonder wheel entrance, so we went around to the boardwalk to walk around and ended up in a feed lot of tightly packed music fans. a couple of thousand people wedged between the cyclone and astroland...

it was not a fun experience especially since i'm a hallway at concerts-- and by chance so is caroline. so what happens when we stand near each other is undeniably a sign that neither of us are making this up.


here's the thing, the sound was so unbelievably bad and we could barely distinguish the live band from the jennifer lopez sirens blaring out of the bumper cars PA--- what i'm saying is i have no idea what bands were playing and when. so this isn't going to as much of a music review as it is a yarn about one horribly sweaty day in coney island*. we found some beer for caroline, went to watch people shoot the freak, and then got some italian ices- when who should i run into but editor/mensch mr. barney schmidt himself! finally got to meet his fiance milena and they are totally adorable. AWW. then we went people watching and ended up wandering directly behind the stage- where we heard the music perfectly- and then around the bend and over the pedestrian walkway on the other side of the aquarium- where the sound was ALSO great. plus, it was shady... and there was great people watching. lots of people were walking around with churros and all kinds of foreign treats. at that moment in time, i believe coney island was the most diverse spot on the planet (when you include all the white kids there for the music festival). i did in fact see a family of pygmies.

when it came time for stephen malkmus & the jicks to hit the stage we walked back over to the "main stage" and braved the port-a-potties in the shadows of the cyclone. at this point i would like to pause and thank moe.down for consistently cleaning the por-a-potties on a strict schedule over the long moe.down weekend... especially considering the state of these siren music festival port-a-potties about 6 hours into the festival. no excuse for that.

then we did some people watching, which will be represented by this video here taken from the curbside next to the "virgin megastore tent". for shame. this video represents the depressing** state of being at the siren music festival at a heat stroke inducing coney island.


anywhoosits, when malkmus hit the stage we agreed that the best place to see the show was in back of the massive crowd because it was such a clusterfuck everywhere else. we attempted to move up away from the blaring speakers set up halfway back. we got in front of the PA and the music from the speakers in back of us was so loud, we couldn't hear the stage- except for the drummer- whom we heard perfectly clearly, and was out of sync with the speakers behind us. marty or moe.'s sound guy would have had that shit mixed CLEAN. for shame village voice "music festival". for shame.

since we couldn't see the stage anyways, we decided to go back where we knew the sound was good. we cross the street, climbed the stairs to the pedestrian walk way and went back to the boardwalk, where we stood directly in back of the stage in the sweet spot. while the volume was low-ish, it was mixed properly... and the people watching couldn't be beat. we had a nice conversation about what makes us pavement/malkmus fans. stephen's music swirls around and explores very dark places, it tangles with them, but it always resolves itself. the lyrics are nonsensical taboot. it's a lovely marriage of genius and madness. well done. i do miss pavement though. sigh.

caroline got hassled by cops for drinking beer on the boardwalk, even though she BOUGHT the beer on the boardwalk, from the place about 20 feet away who's sign we were standing near. eventually we made our way back up the path way and towards the subway station where we listened to the last few songs. they ended with a rousing version of eddie money's "two tickets to paradise" and we thought we were all clever and would get on the first train back but we were standing on the wrong platform (we're smart like that) and realized it about 30 seconds after the correct train left. oh hippies, won't we ever learn?

when i got back to my car near prospect park there was a sketchy white cargo van with curtains (you know the kind they make PSA's about?) doubled parked next to me. the nice locals playing dominoes on the stoop didn't know who's it was, so i banged on the van a bunch (half expecting a pedophile with a sawed off shotgun to bust out), walked it off and by the time i got back some big dominican was running towards the van with keys apologizing. then i got stuck in traffic for 45 minutes. i am never going back to brooklyn.

okay, i gotta say, 7/19/08 village voice siren music festival featuring acts like ra ra riot, times new viking, and the incomparable stephen malkmus & the jicks... 3.5 HUZZAHS. you really did suck. i had fun hanging out with my friend, but its hard to enjoy new bands (or the ones you came to see) when you can't even hear them, so top notch job on the sound and organizational aspects of a music festival, dipshits. it'll take more than a few tacos doused in hot sauce in an alleyway to get me back to coney island ever again.


* the last horribly sweaty day i spent in coney island, i nearly puked after going on the tilt-o-whirl. [note to possible suitors- do not take me on the tilt-o-whirl]
** for the dude who left a comment on the youtube page this is posted at: go fuck yourself, novice- this festival pretty much blew and for the record, i don't listen to douchebags in eyeliner.
Posted by lynn at 10:18 PM 1 comment: