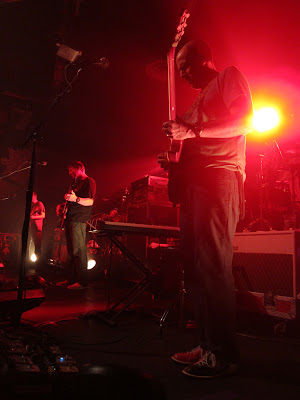 For the record, I'm still alive, but have been too busy to see or write about live music for the first half of the year. Also, I almost died 2 weeks ago. Funny story. Here's the lowdown on 2013 thus far:
Camper Van Beethoven & Cracker, 1/19/13, Stage 48, NYC: This show was really satisfying. Killer Guarded By Monkeys and Johnny Hickman brought tears to my eyes during the Another Song About The Rain solo, which was dedicated to a friend of the band's that had recently passed away. Short sets. Odd venue. Happy Birthday, Heidi! 8.7 HUZZAHS!
moe., 2/1 & 2/13, Best Buy Theater, NYC: Have been waiting to see moe. at the Nokia/Best Buy for years now and so glad they finally made it! It definitely lived up to my expectations. It was a great room for them. The energy and solid punch of this run reminded me of the Legendary 2004 Thanksgiving Roseland Run. The boys are bringing it this year. It's a shame I had to miss snoe.down, Danbury, and the Stone Pony. These Nokia shows were MOTHERFUCKING STELLAR to the 9.3 HUZZAHSth DEGREE.
Todd Snider, 3/8/13, Irving Plaza, NYC: FUCK YEAH!!! He was noticeably more shitfaced than usual, but it was still a delightful night. Love the full band! 8.4 HUZZAHS!
Spirit Family Reunion, 6/7/13, Brooklyn Bowl, NYC: A fun adventure from start to finish in ways I will never describe here. It featured both a monsoon and the haunting, uplifting power of non-denominational gospel music. Really felt it in here [raps knuckles on sternum]. What a fantastic night! 8.8* HUZZAHS!

So, I'm starting this review early, cuz I don't know if I'll have the time to do it all afterwards. And the amount of guilt I've been feeling about missing so many moe. shows this year is starting to really eat away at my insides. Perhaps quite literally, as I had an emergency Appendectomy last week. Yes, exactly 7 days prior to an intimate 2-show moe. NYC run that I have REALLY been looking forward to, I found myself curled in fetal position with an IV pumping me full of drugs to quell the primitive screams of horrendous pain echoing through the walls of a Jersey ER at 4:30AM while my Appendix ruptured. The denial-laced pathetic madness of a moe.ron determined to see 2 NYC shows sounds a lot like a wounded animal in the jungle, if that wounded animal were screaming, "NO, IT'S FOOD POISONING!!! DO THE TEST AGAIN!!!! AAAAGGGGHHHH I HAVE TO SEE moe. NEXT WEEK AND I MISSED SNOE.DOWN!!!!!!!!".


It was not food poisoning. 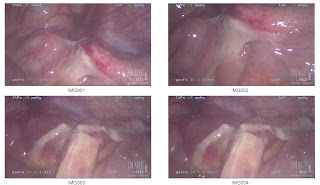 Here's the thing-- not only do I feel like complete shit, I also have work deadlines on both show days. So if I don't collapse first, I am hoping to at least see 1/2 of each show. And the bad dreams started last night. One after the other. Bad Dream #1: I showed up to moe.down without my tent -> woke up sweating. Bad Dream #2: I forgot to make Al cookies -> woke up sweating & horrified. Bad Dream #3: moe. were playing a traveling minstrel show along the West Side Highway bike path and I wandered off during Yodelittle (trying to find a bathroom?) and spent the rest of the day trying to catch up with them -> woke up with heart palpitations and really needing to pee. Total fucking nightmare.

@alschnier Dreamt I forgot to make you cookies. The look of disappointment in your eyes has been burned into my soul. Total nightmare.
— Lynn Kestenbaum (@lynnguppy) June 22, 2013


They say no one really knows what causes Appendicitis, but I was doing a little Math and what I came up with was pretty disturbing:

Put on "hard pants" for the first time since Monday, 6/17/13. Regret it almost immediately.

Looming work deadline got pushed. Getting to the show on time was no longer a problem. The real problem would simply be that I was in no fucking shape to be at a show. I was really tired. It was hard to stand for too long.  And the worst part?  I couldn't even drink. UGH.


Spotted at Lunch on Tuesday. First read this as, "BEEF CHUCK GARVEY".
It's a sign! Works for me! MEAT! 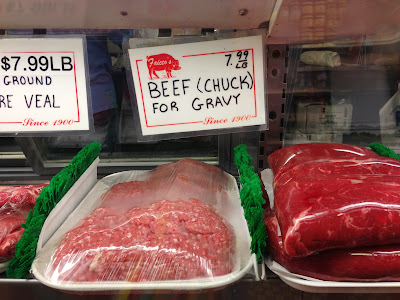 Luckily, my friends are pretty awesome, and Gullo and Babitz got there early and secured the spot up in front of Al's corner, where there was plenty of Leanin' Wall, and a little breakfast nook for me to stand in. El Herno & Pete the Enforcer arrived, and the boys formed a wall behind me to guard against any stray noodly elbows or shitfaced wooks that may have potentially maimed my fragile, faberge egg type self. Cookies were placed next to Al's pedalboard**. All was well with the world. 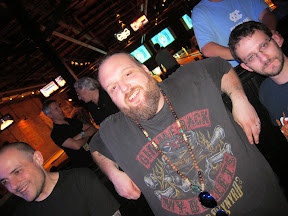 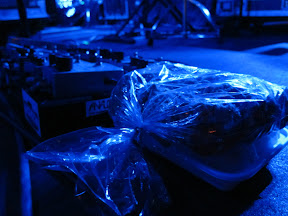 The show started out solid, but to no one's surprise, from our corner Al.side view, we couldn't hear ANYTHING going on Chuck.side. We had to actually look over and check that Chuck wasn't dead a few times. It was quite nerve-wracking. I like moe. a lot better when I can hear both guitars. It's been 3 1/2 years and Brooklyn Bowl still hasn't resolved this issue. Meanwhile, Rob's Bass was building up to the point where it was rattling the organs in my abdomen which I normally LOVE, but was somewhat worrisome and slightly uncomfortable this time. And Al's Amp was so outrageously loud that every time he took a solo, I had to duck in back of the stack near Gullo's Leanin' Wall-- the same plan I used to avoid the moving LED spotlight 4 feet away that kept blinding our al.nook. Luckily I had my earplugs, Hern & Pete are both deaf/had sunglasses, and Babitz was born without any pain receptors.

I love Suck A Lemon, but Chuck's kinda integral in that experience, and we couldn't hear him. Still good, I guess. -> Dr. G was fun and got the crowd bouncing. Not Coming Down was pretty cool, but -> McBain -> Head -> McBain was hands down the highlight of my night. Killer McBain! Rob kept it super tight and the vein in Al's forehead was pulsating as he struck each of his guitar poses. -> Wormwood -> Okayalright was a really fun way to end the set. Dancing was difficult without the complete cooperation of my abdomen, so I was taking it easy, but I was definitely still smiling and enjoying the show. 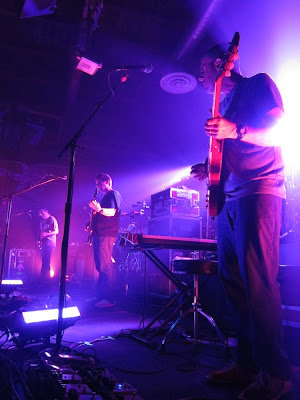 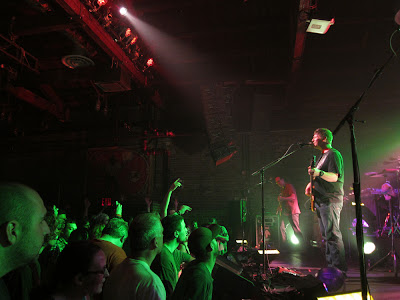 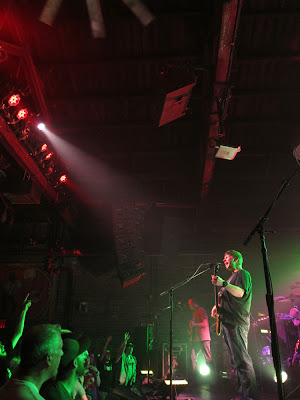 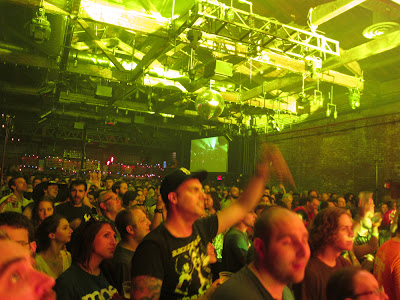 Setbreak proved tiresome. It was Nap O'Clock. Set II started with a really sweet Can't Seem To Find, a love ballad about scheduling conflicts and the pitfalls of time management. Man, I freakin' needed that. Then they kind of lost me with Blue Jeans Pizza -> She (which was enjoyable, but my energy level had plummeted), a new tune called White Lightening Turpentine which I don't remember any of the lyrics but seemed to be about cocaine. 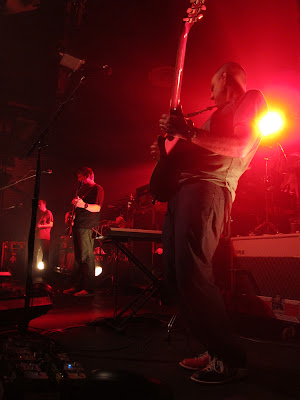 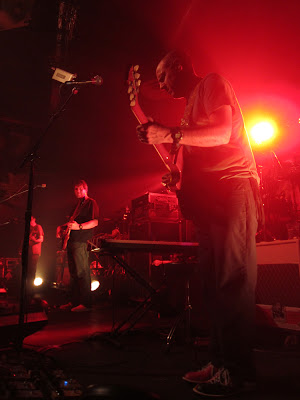 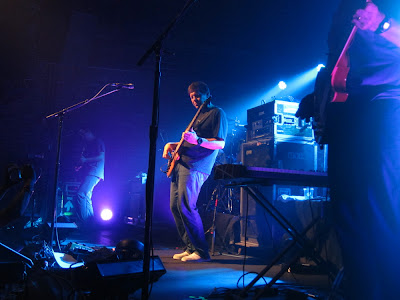 This is when I finally lost my patience with 1) not hearing Chuck, 2) that fucking spotlight, 3) not having enough air, 4) mostly #1. So, us stragglers (Hern had already retreated for the sake of moe. with Chuck) went back by the soundboard where the view was lacking, but the Satan was strong. Good move. -> a sweet Opium, a funky Big World ->


Ricky Marten, when I finally gave the fuck up, wished the show would end already cuz I refused to leave early, and went to sit on a couch in the lounge and watch on the monitor while trying to get comfortable despite the fact that my gut felt like it was burning and my muscles were yelling at me because they all needed to go to sleep -> Plane Crash and WOW WHAT GREAT TIMING TO ALREADY BE SITTING ON A COUCH.

I wandered back in for the encore of St. Augustine thinking I'd get a 2nd wind, but only got like a .0002 wind. Obviously, I was very excited when the show ended so I could go home and sleep. 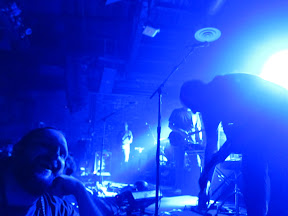 I did not like the way I felt when I woke up. And actually, throughout most of the day. It wasn't good, people. I did everyone at work a favor and showered. Another deadline looming over me and the Beekman show started at some unreasonably early time-- I was hoping to at least see Set II. And shortly before the band hit the stage, my deadline got pushed. While I was happy to be released to go see moe., these pushed deadlines just meant I would be at work on Thursday until 2AM, and would equal 3 really fucking late nights in a row (turned into 4 due to an added Friday deadline).  But at least I'd get to see moe., right? I pulled into a sweet street spot across from the venue at 6:50PM and hung out for 10 minutes until it turned legal. I tried putting the windows down to hear the band. It didn't work, but I did save $30!

I walked in during Meat which quickly -> Hi and Lo. Got a nice view of His Royal Chuckyness, who was well-represented in the mix on this evening-- PHEW. Found the running crew in front of the soundboard al.side. Chromatic Nightmare was nice, Haze was fun. The Brooklyn Bridge is pretty, the Tent was really cramped/hot/humid, and the Security Guards were ample. 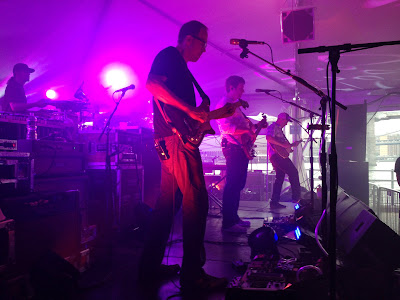 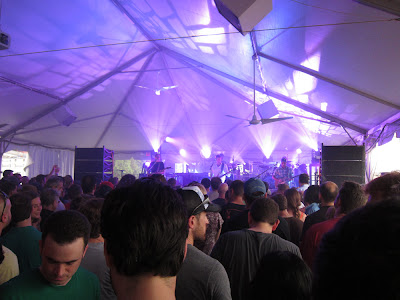 Sometime during setbreak I got really light-headed and some sort of SUPERSTORM FRANKENWAVE OF MEGA EXHAUSTION hit me. I needed to lean on the barricade. I needed air. I needed to sit down. I needed to eat fries and drink water. We fled to the back. It helped, but I was already done. 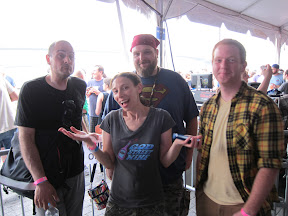 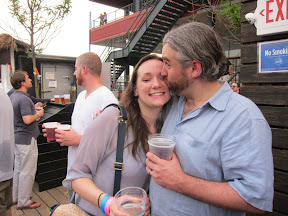 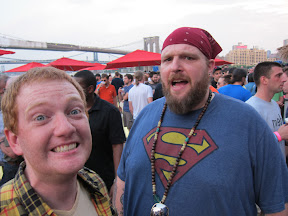 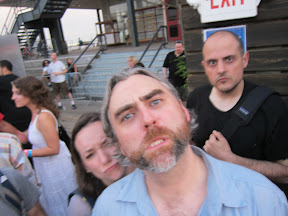 WHY WOULD I EVER LEAVE A moe. SHOW EARLY? WHY? Well, maybe a Plane Crash encore. But certainly not because I had an ORGAN REMOVED FROM MY BODY A WEEK BEFORE.

So, I stayed. I mean, they played Plane Crash on Tuesday. And also, I'm a fucking idiot.

Set 2. I was really fucking uncomfortable and spent the majority of the set out back either leaning, or sitting on those goddawful plastic couches that aren't designed for short girls with lower back problems and thought about how nice it'd be if I were at home in the A/C and my Pajamas. But then I wouldn't have gotten to hang out with so many friends or hear a pretty fun SOMP -> Meat (cont. from first set). I finally thought I was getting a 2nd wind and attempted to move back inside during an uptempo Raggae Letter Home -> Brent Black, but I was wrong. I just couldn't fucking do it. Jesus, it was awful. What happened to me? Was it the sobriety? Or are your moe.ron balls stored in the Appendix? All I could do was wish for Farmer Ben and NYC to end, so I could go home with whatever was left of my moe.ron dignity and some well-earned bragging rights.


"Yeah, well-- I went to see moe. 2 nights in a row, 7 days after my motherfucking Appendix burst.  SUCK IT."
- Future Me, talking to someone from PT

God that was awful and I'm glad it's over with. I won't discourage it, but really can't recommend it either. One thing's for sure-- I just upped everyone's game!


* Infinite points given for undisclosed chivalry not reflected in total.
** Let the records show that Dan stole 2 of moe.'s Oatmeal Raisin Pecan cookies. 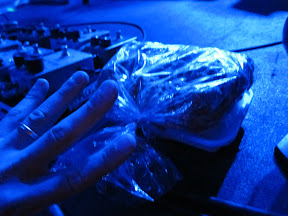